When I was five my dad was stylist to the Tiller Girls when their dance show came to our city. Tiller Girls had to be over 5’10”; had to be able to kick their noses with their shins while retaining beautiful, permanently etched smiles; and had to travel all over the world. I looked up at my dad and asked, “If you’re 6’4”, will I grow up to be over 5’10”?”

When I was nine my mom took me to a movie about the mother of “modern dance”. Known as much for her flamboyant lifestyle as for her progressive dance, Isadora Duncan was an adventurer, revolutionist, passionate defender of the free and artistic spirit. And she danced all over the world. I looked up at my mother and asked, “Will you be sad if I grow up and dance all over the world?”

When I was 11, I worked at a famous theatre whose stage has held many of the all time greats from Olivier to Dame Judy Dench. I got to sit in the best box office seats during final dress rehearsals, hang back stage with the actors, and play with props and wardrobe. I looked up at my parents and asked, “When I grow up … ?”

* 12/29 - Sad addendum. Was officially announced that Christine is "presumed dead"; also confirmed that Charlie Fowler was the climber found. Chris was not tied to him as originally assumed. Friends & colleagues agree that she died the only way she would have wanted -- on the mountain.

Since I forgot to blog last weekend (what can I say … was the holidays!) I was going to write something flip this morning, in accordance with the creeping dementia that’s part of my current mid-life crisis. But as I logged onto my server home page, two little words smacked me in the face and my stomach fell to the floor.

I’d already moved past the main page so I quickly hit the back button and darted my eyes back and forth for what I thought I’d seen.

Headline reads: One Missing Climber's Body Found in China … but where was that name that so sharply bit into my non-caffeinated brain?

I held my breath as I scanned the page, as though that would change what I was about to read … oh no, please no …

But there it was, in black and white. Courtesy of the Associated Press.

“ … Christine Boskoff a top female climber, and Charlie Fowler, a well-known climber, guide and photographer, were reported missing after they failed to return to the United States on Dec. 4.” Rescuers have located one body but not yet released identification. They suspect the other body may be attached to it under the snow.

Chris has led hundreds of clients to safe summits, including the indomitable Everest—not once, but twice. In October, after successfully leading three Mountain Madness clients to the summit of Cho Oyu at 26,906 ft, she met up with Fowler and they set off on vacation to explore unclimbed peaks in China. It was somewhere there, that they both went missing.

I’d like to tell you the story of how Chris and I met just after she’d purchased Seattle’s Mountain Madness; how hard she’s worked to get to the top of her game, and what a really interesting person she is. I want to tell you how Chris overcame great adversity, yet remained determined, genuine, and down to earth. I’d also like to tell you how much I respect her as a person, as a business woman, and as a climber … how much others respect her as a climbing lead, and how her goal of summiting the top 14 peaks then led into climbing previously unclimbed mountains in China. But it seems inappropriate today; rescuers still don’t know if she’s dead or alive.

In these hours of uncertainty, Christine, I hope beyond hope that your years of meticulous training, championship climbing skills, and survival abilities have lead you to safety. My thoughts are with you and your family, and with the rescue team who is still anxiously looking for you. Come home safely. Come home soon.

Ps. I don't know Charlie Fowler, but I wish the same for him too.

Washington had a little wind on Thursday. Not the kind my grandfather typically inflicted upon us following a traditional English roast, but wind that howled at up to 115 mph east of Mount Rainier.

Trees crashed through houses, blocked streets, tackled telephone wires, and brought down cable poles. Over a million homes and businesses were blacked out; and as temperatures dropped to zero and below, most were also left without heat. Traffic lights, gas stations, and major business centers were all dark. And because no power meant no security, few banks, ATMs, or shopping malls were open for business.

Meetings got cancelled. Appointments rescheduled. And the handful of us who showed up for work, stood around second-guessing the next course of action before getting in our cars and forming the parking lot that used to be a freeway. A ten minute drive through back streets took over an hour. The smell of fresh pine leaves permeated the air, even with windows shut. And familiar roads—now covered in branches, tree stumps, loose wires, trash cans, fallen street lights—became maze-like. Stop, turnaround, up the hill. Oops, blocked. Stop, turnaround, cut through this housing estate; oops. You get the picture … and I was glad to get home.

Despite my Eskimo boots and ski jacket, the wind, now much calmer, cut right through me as I stepped across the lawn picking up wind-torn roof tiles. I looked at the damage to the newly built extension on the home down the road. It’s taller than most of the other houses on the water, and the angry wind of the night before had ripped away two thirds of the roof, taking almost half of the neighboring roof with it.

Feeling edgy, not knowing what to do, I headed up the hill to see what was going on. The coffee shop had power, and although I was often the only customer in there, today all armchairs were filled with people sharing stories of caved in ceilings, collapsed sheds, boat docks folded like accordions, kid’s swing sets that ended up three houses away, and hundreds of dollars worth of food spoiling in the freezer.

Some folks were very matter of fact; they’d been through much worse, and probably would again. Others worried how they would keep their kids warm that night, if their insurance would cover the damage their Douglas Fir did to their neighbor's garage, or how their aged parents were coping.

I thought about the chaos of Christmas that engulfed us up until the day before the storm blew in, and how quickly the pressures of crass commercialism had been replaced with pressures of a different kind, especially for those whose homes were damaged. The important things of yesterday—getting Jack’s Laptop, what to buy Uncle H, mailing baby Ali’s gift—suddenly seemed insignificant. In a surreal way, in spite of (or maybe, because of) the tension of the unknown and the additional financial burdens people talked of, I sensed that most were enjoying this camaraderie blown in by the wind. A community of strangers quickly formed in times of need, but, I wonder, how quickly forgotten.

There are those who are meant to be lifelong employees. You know them. They think in terms of "Company Benefits".

They like the illusion of belonging to a collective, an ensemble—not necessarily a team, but a group of similar beings cocooned in a common environment, working toward a common company goal. 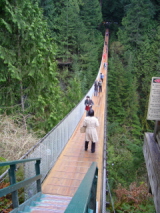 They’re often more codependent than interdependent, feeding on bigger- better-brighter corner offices, and the occasional cluster recognition. And unless very ambitious, they are usually quite content to move ‘according to standard performance expectations’, within the constraints of the path already worn.

There are those who are not meant to be lifelong employees. You know them too.

They think in terms of the three P's: Passion, Potential, Possibilities. They might be drawn to more innovative projects and careers, seeking more responsibility, more creativity, more flexibility, more self-expression. They might be motivated by intrinsic values such as being their own boss or building an empire. They might simply 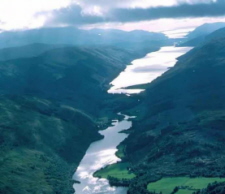 choose to live life on their own terms, to gain broader life and career experiences.

Or they might be stoked, deep from within, by the desire to look life in the face. To learn and stretch beyond prior successes; to create and serve a mission in life. They are change-makers, feeding on challenging themselves, on growing, on making a difference. Striving to earn the epitaph they want etched on their tombstone, they relinquish the path well-worn and tread their own.

Which road will you travel? 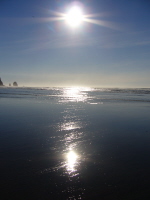 Still at the beach.

Savoring every minute and will see you next week!
Posted by Bibi at 11:59 PM 11 comments: