A distant friend apologized for not calling in a while, “…but I’ve been keeping up with you via your blog …” she said.

I wondered how many other bloggers have heard statements like that. As though the daily ups and downs—all details of our lives—are routinely posted in cyber land!

I don’t know how it works for you, but I rarely know what I’m going to write about when I sit at my PC to post my blog.

A couple of weeks ago I sat down to write about the creative practice. But then my dog nibbled my toe, and I ended up blogging about him.


I once sat down to write about the unparalleled thrill of skydiving. But instead, I blogged about writing in the nude. Another time I planned to write about the rush of zip-wiring in the Sierra Madres ... or maybe unleashing one’s voice; but instead I wrote a letter to the VILE Rush Limbaugh.

Today was no exception. As I sat here running my fingers across the keyboard, eyes closed trance-like, much like a pianist running scales, I thought about those who say that, regardless of art-form, creatives must practice every day, no matter what … and I was about to very strongly disagree with them, when I realized (rather randomly) that another year had slipped silently by.

The one-year anniversary of Bibi’s Beat (no longer a virgin). Another Father’s Day without dad (pop, where are you?).  And it’s almost a year since I moved house and was terrified by midnight prowlers.

That is the beauty of blogging!

One gets to play with their blog instead of constantly being on deadline, restricted by column count, by topic, by editorial approval, or client-facing audiences. 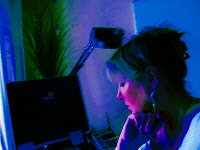 I can set myself little tests: Write 372 words exactly. Write only for 12 minutes. Pick a word and create a post around the word. Type a random question and take it from there.

I might think about someone who's missed, and a great day we once shared. Recall an unpleasant time of life and the lessons learned. Let rip on something I feel strongly about, or pick a stance on a topic and write the opposite viewpoint.

I might write about something that happened three years ago today. At 4 pm last Wednesday. Or maybe, never at all. And since I post only once a week, blogging provides a playful break in the routine of writing for money!

A pleasant, and unexpected, outcome of blogging, is the interaction between so many wonderful and talented creatives. I’ve learned, laughed, and cried along the way with all of you!

But I’m curious about you. Why do you blog? Does it sometimes become a chore? How much time do you spend blogging? Do you ever think of quitting (I know some of you do because I’ve read you say so!) And if so, what keeps you blogging on?

There’s someone new in my life. Don’t get me wrong, he hasn’t replaced the other someone. Let’s just say he’s added a renewed sense of energy and some ... tantalizing new tricks.

We’ve been together only a month, and already, I’m crazy in love! I kept it quiet (until now) because … well … I wasn’t sure it would work out. He’s been around the block a few times—you know how baggage goes—but I thought he was worth the risk.

We’ve kayaked together; sailed, hiked, and climbed rocks. On Wednesday, we watched a grey whale puff his way up the narrows during our early morning constitutional. On Thursday we picnicked on the beach, snuggling close as the sun set. On Friday he brought me crab. Saturday, a seal’s flipper. And this morning … a half eaten fish.

His brows knit together and his soft amber eyes fill with confused disappointment as I squirm at the delicacy of the day, so proudly dropped at my feet. I kiss his nose and ruffle his head, “Good boy Dylan. Come on … let’s go chase seagulls!” 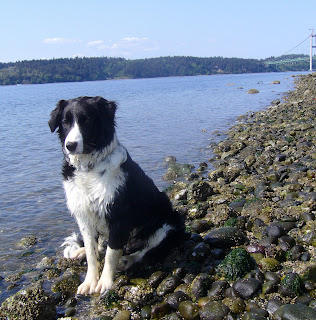 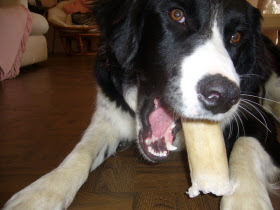 I renamed him Dylan, derived from Welsh mythology: Dy = Great, Lan = God of the Sea, very appropriate since he's of Welsh origin, loves the ocean, and Dylan Thomas is one of my favorite poets. This Great God of the Sea was rescued from an abusive situation in Nebraska. He then spent several months traveling with his rescuer in an 18-wheeler across the States. But it was unfair to keep a working dog confined in a cab, so the trucker reluctantly turned him into PAWS. He was fostered out to a lovely foster mom down on the WA/Oregon border, and then I adopted and brought him up to Seattle. He's a Welsh Border Collie mix, about 2 years old. And he's a keeper!

If you read writing for lemons-part I, you know exactly why I was sitting slumped at the breakfast table drinking cold coffee.

The shears were being returned. Unopened. I reached for the bag of groceries I’d brought in and started unpacking and ... unpeeling.

Every piece of fruit and veg I’d bought, from bananas, cantaloupe, oranges, apples, lemons, to cucumber, tomatoes, and squash, had an annoying little sticker very firmly attached to the skin. Oh, please!

I began washing and scraping the stickers off two dozen lemons. What words of wisdom are sellers trying to impart to consumers, I wonder? What could possibly be of such great importance that it has to be announced on every single piece of fresh produce?

Was it a health warning about pesticide use? Or had lemons suddenly been linked to cancer? Or brain tumors?

I grabbed the Sherlock Holmes magnifying glass (again) and hovered the lens above the label. Hmm … it ... says … ock!! “LEMON.”

Now, I know firsthand that decisions in corporations are rarely made quickly. So I imagine a typical scenario in making such an earth shattering revelation, and wonder: Who wrote the copy on that? And what was their fee? Was the writer with an ad agency, or was he/she plucked from the marketing team? Who developed the concept? Approved the proof? Did it get redlined and redrafted? Did they use an editor to make sure it was spelled correctly? And most importantly: How many branding hours were billed?

If they are going to take the time to label every piece of food for us ijeet consumers, shouldn’t they also offer the explanation in Spanish? “Limon.” Or is this a subtle way of teaching the English language? You know, like we had labeled picture books in kindergarten … table, chair, bed … lemon.

Seems I have more questions than answers. But, I guess if you can get it, writing for lemons would be a pretty safe gig.
Posted by Bibi at 11:51 PM 22 comments:

writing for lemons: part I

No, this isn’t a piece about being paid for your writing with lemons. It’s part one of writing for lemons. Confused?

Well let me back up a bit.

It all began when I got frustrated with the Fort Knox of packaging that encased a pair of pruning shears I’d bought on sale at Target. I could not, for the life of me, get the gosh-golly-darn shears out of the plastic tomb they lay in.

After fingers and teeth failed to unravel the seal, I took a large pair of kitchen scissors to the thinnest edge of the package. Then I took my electric carving knife to it. And finally, I ran into the garage and revved up my newly acquired electric hedge clippers. But all to no avail. The shears lay ensconced in plastic, allowing quick-and-easy, front-and-back view, but zero access.

Thinking there must be some new-fangled way into the case, I flipped it over and started reading the instructions printed on the back. Now what’s the point of putting all those words on a package when NO ONE can read them because the font is Times New Roman point-minus-three !

Everything but HOW TO GET THE IJEET SHEARS OUT OF THE PLASTIC CASE.

Grrr. I sat down at the breakfast table and sipped the coffee that had gone cold during the 30 minutes I'd spent fiddling with the shears. And then it occurred to me. Even though they had omitted the crucial step—the key to unlocking the plastic tomb—a writer had actually sat down and written all that junk on the back of the shears.

I rolled my eyes and wondered if it was the copy editor who'd cut the line: “Here’s how to open …”


Part two of writing for lemons next week
Posted by Bibi at 11:10 PM 23 comments: