I’d spent many exhilarating hours sailing in the sunny bays of San Diego, but had never had an urge to kayak. Truth be known, I’d always thought kayaking looked slow. (Interpret that as dull!) And I wasn’t altogether too sure that I’d fit my Amazon-like frame into the tiny narrow cockpit of a kayak—let alone keep myself upright. (Interpret that as chicken!) 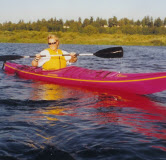 But then I moved to the emerald waters of the Pacific Northwest, and each weekend, as I explored a different lake or river trail, I felt land-locked as I gazed at the hundreds of brightly colored sails streaming by. At the time, I was a returning student; funds were limited, and the cost of hiring a sailboat prohibitive—maybe a plastic, blow-up dinghy?

Ditching that idea—and with more than a little trepidation—I took a four-hour introductory class to kayaking on Lake Washington and, within the first thirty minutes, became a lifetime kayaker.


Kayaks don’t merely float on the water—they put you in the water, at one with nature, allowing access to areas that other boats can’t get to. Down in the wetlands for example, where you can paddle within a couple of feet of blue herons blending almost invisibly into the tall wispy reeds. Where otters, busily gathering floating sticks and leaves, dodge around your kayak as though it's part of their terrain. And where mama duck, sensing that your quiet gliding action poses no threat, swims right alongside you with her babies.

One of the brightest blessings of kayaking is that you can get far away from the aggravation of noise pollution, forgetting for a few hours the cacophony of screaming sirens, freeway rumbles, boom-box low-riders, and raging leaf-blowers.

Quiet calms the soul as you surrender to the rhythmic heartbeat of a well-timed paddle lapping the water’s surface. Sensory overload releases its toxic grip as birds natter lyrically. And priorities shift, as cool winds wrap around you, gently whispering, nudging you on.

Doesn’t matter whether you kayak at sun-up or sundown, there’s always some new wonder to experience. For me, almost nothing matches the sight of a mighty bald eagle swooping down within feet of your kayak to capture an unsuspecting salmon working his way back to the creek. Or the simultaneous rush of panic and awe as the black and white arc of an Orca whale surfaces, just yards away, dwarfing your kayak.

I’ve gasped in child-like delight as I rounded a cove and Mount Rainier jumped seemingly out of nowhere. Or as a turtle suddenly popped his head at my side. I’ve felt a rush of warm comfort at the simplicity of a setting sun easing its honey-colored fingertips below the ridges of the majestic Cascades. And a midnight island coastal tour by the light of a Harvest moon? Well, let’s just say that puts the ‘ahhh’ back in romantic!
Posted by Bibi at 11:59 PM

I had a good experience Kayakking down the river wye.

Wow! This was so beautiful. I've never kayaked but would love to learn. Love your descriptions here.

Oh Bibi that sounds like a lot of fun and that photo of Mount Rainier is to die for!

Just reading what you wrote gave me the feeling of it.

That sounds so incredible, I wonder if it's ever too late....?
I'd probably flip it and drown.

We took our kids canoeing once (when they were young) on the Deschutes. It was positively the best.

There's a river that skirts the marsh where I walk in the mornings. I often see a kayaker out there making his way back upstream. It looks like a lovely way to start the day.

And with that post, suddenly my urge to return to the great American continent and explore the wonderful landscapes returns...

Preferably in a kayak.

Breaking my self-imposed silence briefly to say thanks. My experience in a kayak is limited but it certainly primed me for wanting a lot more. Soon, I hope.

bibi, i kayaked this summer. i LOVED it. what i loved most was the dragon flies--dozens of them--hovering and zooming just above the water. meditative, eh....

I agree with Michelle and Pamela. Your inspiring descriptions gave me the sense of being there. I'm not much into nature, preferring a cityscape to a landscape, and my idea of the great outdoors is that strip of land between the US Capitol and the Washington monument, but your article filled me with a deep sense of awe. Perhaps I never gave Mother Nature her just due. Thank you for yet another great article.

ultra toast, love the Wye Valley! Spent many hols there as a kid ;-)

Michele, try it ... much easier than I thought and it's a great escape.

Pamela, it's never too late ... I was afraid of exactly the same thing and I've only flipped once (when I was trying to go upstream in white water ... duh)


Diedre, mmm. If I had my own kayak, that's probably how I'd like to start my day.

Ant, what a fun way to travel that would be. I've a friend in Canada who writes books about his travels in his kayak.

Andrea, thanks for breaking your self-imposed silence ... kayaking offers me an alternative to pacing the studio floor and helps clear my head (as you talked about last week).

kj, very meditative!!! Good way to get in the zone.

John, I love big cities like Manhatten and Paris and London ... but I also love wilderness, as you can tell. ;-)

I went white water rafting in a kayak when I was 18 and the next day I was so sore, I could barely get out of bed.

Haven't been in a kayak since.

glad i get to live vicariously through you!

Kiyotoe!!! Welcome back ... yes, it can make your muscles ache to begin with.

This makes me long for summer so I can jump in and take off. Lovely piece Bibi.

It sounds amazing! I wish I lived somewhere with rivers and wetlands and interesting watery things!

Sounds so peaceful...I get the same feeling out of being in a canoe on calm waters on a warm summer evening, around dusk.

Thanks for the image and experience, Bibi. Beautifully described and inspiring.

Stace ... yeah, I couldn't live away from some kind of water now that I'm used to it. I get landlocked ;-)

Within Without ... mmm, dusk is wonderful time to be on the water.

Fabulous! I felt as though I was there.

I'm still catching up after my trip...now I want to kayak! I can't row, but I used to paddle so I think I could manage a kayak.But where? We have sharks (sometimes crocs, too) in our stretch of ocean.
Thanks for such inspiring images.

Wow dinahmow, I defintely wouldn't be kayaking around sharks or crocs myself!