the girl in grey

Chin tucked down, eyes lowered to the splintered wooden floorboards, she shuffled forward in line with 124 other homeless people seeking food and shelter that night. The cuffs of her silver grey suit shone with wear; the heels of her black pumps sloped down on the outer edge. She carried a small black purse, hooked over her head and shoulder, and wrapped a black overcoat around her arm.

Every two steps, she leaned forward a little, shunting a battered suitcase in front of her with the side of her leg. She was blond and pale and baby-faced, but I guessed she was in her mid-twenties.

Earlier, we’d filmed outside the building but weren’t allowed to shoot or conduct interviews inside the shelter, so Scott tucked our camera and sound gear under one of the large standard army equipment desks that doubled as a buffet table. For all intents and purposes, I was just another faceless volunteer serving the needy.

I spooned pale gravy over the plate of mashed potato and dry chicken that the girl held out to me, and made some stupid remark about enjoying her meal. She didn’t meet my gaze, or return my smile, but turned away with a barely whispered “Thank you.”

As other ‘guests’ came back for seconds, or to share their stories of the day now behind them, I looked around the room for the girl who didn’t belong here. She was in the far corner, rolling out one of the yoga-like mats that the homeless were given to sleep on. Between each mat and the stranger next to it, lay only 18-inches of bare floor.

And then there was the girl in grey.

Who was she? Was this her first night at the shelter? Was she a regular? Did she have family? Or friends? A job? Why was she here tonight?

The shelter manager asked us to leave so the guests could prepare for lights out. Scott lugged our 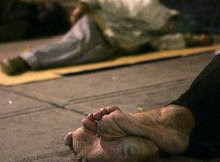 heavy equipment and I followed behind, looking one last time over my shoulder at the girl in grey. She was kneeling on her mat, head tucked in silent prayer.

We threw the gear in the back of the van and remained mute until Scott dropped me at my front door. “Heavy, huh?” he looked over the top of his glasses.

Next evening—and the next—I went back to the shelter. No Scott. No video equipment. Just me and a glimmer of hope.

I wasn’t looking for ‘a story’; I wanted to talk to her, to hear her story. I hung around the square outside the front door watching the expressions on the faces of the homeless flip from anxiety to relief as they were head-counted indoors, assured of a mat for the night. But I never saw her again.

Occasionally, the glance or gesture of a stranger, sparks a memory of that night and the girl who didn't belong there. So I pause for a moment, wondering what truth the girl in grey could tell these years later … and, although I’ll never know who she was or what story she had to tell, I truly want to believe that she found the happiest of endings.

Over the years I've known several people who lived just one paycheck away from being in the same situation.
Very well told, I felt for her without having known her.

Thinking maybe your part of this story was to tell it.

I agree with Pamela- maybe your part was tell the story you saw, not to hear the one you thought she had to tell.

I loved this story, for me ,as a nurse, I find myself wonderign what WAS for my elderly patients who are unable to converse anymore. Sometimes, I can see from their actions and mutterings, what their professions were.
The old lady that continually corrects your grammar, was an English teacher.
The old man that comes up and preens your uniform for you. Fixes your collar on your shirt..he was a talior :)

Wow. What a haunting image. I once worked in a county hospital with a secretary who lived in her car for over a year. We never knew she slept in her car. She was always dressed well. The unit secretaries wore different color scrubs from the nurses. She was clean and neat. We never suspected. After she was able to get into an apartment, a few months later we were talking about the homeless who come around dinner time with made up complaints. We knew they just wanted to have a food tray. Someone mentioned that it is a thin line between being a homeowner and being homeless. Someone corrected the statement and said that the thin line reference was about sanity and insanity. Then our friend said that the statement was also true for homeless and homeowner. After the discussion, she approached me and another friend and told us privately about her car. I was so shocked, I did not know what to say except "Oh my God!"

While in college we were required to complete 25 hours of community service and I did mine at a homeless shelter downtown.

Every single day that I was there, I experience something similar to your story. I would see some young woman or some middle aged guy that just seemed so out of place and all I could do was wonder what happened that landed them in the Flipper Temple Baptist Church basement.

It's humbling and surreal at the same time to be surrounded by that kind of despair and misfortune.

This is so heartbreaking. I hope she found an easier life, that whatever put that woman on the streets shifted and let her find a home again.

Pete, Scary isn't it. I knew someone who lived in his truck for 3 months but didn't tell anyone until he got back on his feet.

Pamela, yes, you're probably right because I couldn't find her again and I have no idea why I suddenly thought of her and decided to write about it.

Lisage, I think you're right...

Bibi said...
This comment has been removed by the author.
9:52 AM PDT

Cazzie, thank you ... when you talk to people that others may 'write off' it's often amazing to learn of their experiences. You sound like a wonderful nurse, full of compassion and energy.


Ces, wow that's mind blowing. It happens to good people much more often than we realize. And yes, many are mentally ill and off their meds ...

Kiyotoe, when you see such things, there's defiinitely the appreciation of 'there but for the grace of whatever..."

Ian, I can only imagine what you must have experienced in 3 years of that ... certainly does put a different spin on the world and make typical issues seem trivial.

Deidre, I'm an optimist and I really do believe that this was a temporary measure for here ... that somehow she got back on her feet. You just never know what people go through.

I understand your need to hear her story.

I would have done the same thing.

Her story, whatever it is, is important enough to be told.

That second photo is great.

This was fascinating. I wonder what happened to her? I hope that it was a positive disappearance that meant you never saw her again, rather than a negative one.

Vicki ... we spell our name the same too!

Ultra toast mosha god ... that's what I hope too, that it was a positive disappearance and that she'd only been in the shelter one night.

I share your hope for the woman in grey.

No one belongs there.

sometimes the story is better-said by a witness.

According to the Los Angeles Homeless Services Coalition, over 3.5 million people in the United States will experience homelessness in a given year. 39 percent of these will be children under the age of 18, and 43 percent of these will be under the age of five. I find these statistics appalling for the richest nation in the world. But when one looks at the distribution of wealth in America for the year 2000, and seeing that the wealthiest 10 percent of the population owned 71 percent of the wealth, while the bottom 40 percent owned less than one percent, the fact that we have so many homeless becomes less mysterious. Granted, there is at least a small number of the homelessness that prefer life on the street for whatever reason, but I would venture to guess that the majority face economic problems arising from factors that could be assuaged through public programs. If only one percent of the defense budget were put into helping the homeless get back on their feet, I believe the problem would virtually disappear. But that's just my opinion.

Thank you, Bibi, for not only writing a wonderfully evocative tale of an ephemeral soul but also for raising my awareness of the plight of the homelessness in America. Had it not been for your piece, I would not have been stimulated to scour the web for statistics on the subject.

And thank you John for expanding the info on the homeless. The distribution of wealth is quite shocking, isn't it. I was at a seminar when this was brought up and it's harder to swallow when we have such a huge dichotomy in this country between the rich and the poor. Thanks for your input ... I'll check out the links.