Gasp! What’s that you say? Michael J. Fox was “...acting...” in his recent political ads? "Off his meds...” to create dramatic effect? And "...shamelessly.." playing up his symptoms of Parkinson's Disease to stir "...sympathy"?

Well Fox has often said that disease is non-partisan and that he’s simply looking for a bi-partisan cure. So all politics aside, Mr. Limbaugh, it is you who should bow your self-aggrandized head in shame.

Are you capable of discussing any issue without resorting to the kind of playground spitefulness one might expect from insecure 13-year-old girls? You name-call, you marginalize, you spit venom and hatred; and you get downright nasty on a personal, petty level. If there was ever any doubt that you’re nothing more than a bigoted, headline-seeking redneck with his head down a sand hole, (hey you started this, let’s speak language you understand) then your latest outburst against Michael J. Fox and his very real disability should leave no-one questioning.

With the exception of a few gutless wonders sniggering in agreement alongside you, the majority 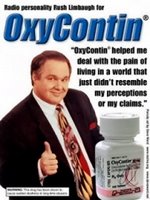 stayed quiet while you dismissed every woman with an opinion as a Femi-Nazi. Even during your public arrest, there was relatively little said about your blatant hypocrisy in loudly demanding that druggies be kicked off our streets, when all the time your thumb was on redial to your own drug dealer and you were busy shoving black-market painkillers down your throat.

Now you’re verbally attacking a man (not his politics but a man) who can’t stand or sit still, or walk in a straight line, because his body is cruelly ravaged by an incurable, degenerative disease.

Had you bothered to garner ten minutes research before opening your foul mouth, you’d know that Fox, like anyone with full-blown Parkinson's Disease, has little to no control over his body. Period.

You’d also know that the slightest amount of stress—whether caused by anxiety, nervousness, frustration, anger, sadness, excitement, or dicks like you—can send his body lurching, swaying, surging, and jerking beyond his control. Parkinson's Disease slows and cramps the respiratory system that permits him to breathe. The muscles and brain synapses that allow him to smile. The chords that allow him to speak.

You are ignorant Mr. Limbaugh. And ignorance breeds ignorance.

Did watching Michael’s body, swaying and lurching, make you feel uncomfortable? Did seeing him unable to control the simplest of motions make you squirm and want to look away? Is that why you redirected the argument—to ease your discomfort and marginalize Michael's brave ongoing struggle by affronting him with your mockery? Or, Mr. Limbaugh, are you simply “...off your meds”?

Mr Limbaugh, in your case it was definitely an "open mouth and insert foot" moment,and,there's no MIGHT about it, get your A** over there and apologize on bended knees.
Thank you Bibi for writing this post.

I think we've just been treated to the truth of Rush Limbaugh. He's finally made a statement that can't be denied, by anybody, as ignorant and mean-spirited. Maybe we should thank him for declaring himself, once and for all, to be an idiot. And even if Michael J. Fox was "off his meds" the fact remains that this is what happens with Parkinsons. Thank you for writing this piece.

Fox was quite magnanimous with his response. I would hope that I could be such if someone attacked my integrity.
His mom was snappin, tho. Thats the way we moms and grandmothers are when our kids are skewered.

That being said, Rush has apologized and I give him a thumbs up for that.

(Didn't see the political ad, nor did I hear the rampage. I've been holding my hands over my ears this election year and humming as loud as I can. Studies with stem cells... adult and fetal...are being done by privately funded research as we speak. It is only Federally Funding that has been blocked.)

I was just sitting here getting my thoughts together to write something on this very same ignorant subject (ignorance relating to Big Rush).

But I couldn't have said anything as well as you already have. Howard Stern is constantly under attack and yet this cat is allowed to spew his crap repeatedly over the airwaves.

At least Howard is funny.......sometimes.

Samwise and I were livid over his accusations and frankly, I hope now that he's totally trashed his reputation and that this will bring to the forefront the absolute necessity for stem cell research. Hell, Samwise has type 1 diabetes, stem cell research can lead to a cure--that's pretty much a given, for millions of people worldwide ravaged by the disease. It's time to stop allowing religious paranoia to rule our government and instead, use sanity and common sense...of course, it seems that's sorely lacking in government today.

My question is why is anyone still supporting him as any kind of authoritative voice?

As for myself, I am all FOR stem cell research. Have been from the beginning, can always will be.

now if those who vote against it had a child that needed that research, you'd see how fast it would get backed.

as for dear old Rush, I have no idea who would still pay him to be on the radio.

Rush Limbaugh is a despicable, hateful and hypocritical sorry excuse for a human being. Thank you for painting him in his true colors.

I hadn't heard about this guy until this statement appeared in the news but he sounds like an absolute prick.

Maybe it's good that people like this come out with such obviously horrible statements - then we see them for what they really are.

You said it all, Bibi, and so very well! Thank you!

Freedom of speech is just that. Rush can drone on for 3 hours every day, but Micahel J. Fox can't be heard in one 30-second ad? That was very low.

Well, I don't know who he is and I don't care. But it's a shame that such stupid and ignorant people exist. I admire Michael Fox, he is very brave.

I wonder what this guy would say if he had this awful desease ?

This was really disgusting thing for Limbagh to say. Callous and very cold. If we all turned off, he wouldn't have an audience.

I envy your word skills Bibi. You packed a swift punch while sticking to the facts and that's something Limbagh can't do.

I'm glad I'm not the only one who felt so strongly about Rush's comments.

I was so angry that someone could be so cruel and it got so much air time (which of course is what he wants).

So it's good to know you all felt he was out of line too! Thank you!!

Kewee, Deidre, Ant... yes, you're so right. But he has many supporters (RL) although I can't figure out why.

Pamela, Yazza, Deslily what really infuriated me was that RLs attacks were personal... he used MJFs disease the sublimate the argument and didn't even go into the stem cell issue.

Gattin, I'm sure it would be a very different story if RL came down with a crippling disease. Although I think he already has Foot 'n Mouth.

MSugal86, I guess from the RL comments that freedom of speech only applies to one side of the line.

Wow! What everybody else said. You go girl.

The amazing thing to me is that this guy, after his outlandish, far right blow-hard bravado, still has far outlasted the 15 seconds of fame he might have had in the first place.

Kiyotoe ... you should write to him too ... I actually sent him this, not that he'll care ;-) And yes, at least Stern is funny (sometimes).

Within Without ... isn't it amazing?! Leaves me speechless. Well, almost ;-)

Bibi, thank you for this. My father died a very slow and painful death from Parkinson's.

People think if you have Parkinson's all you do is shake a little. Nothing could be further from the truth. It's a horrible cruel disease that robs people of their dignity. My father tried to take his own life because he could no longer swallow and he was afraid of slowly suffocating.

It's awful. People have no idea and most do not want to know. Thank you again for writing this.

I saw that you've done some work for Parkingon's Foundation and I hope to see more of your work on Parkinson's in the future.

Vote for stem cell research! If Bush's family had this, things would be different.

Anon...so sorry to hear about your father. I hope is at least comfortable. Blessings!

I couldn't agree more or have put that better.

Kudos to you. I'm going to post a link to this from my site.... people need to read what you said.

There needs to be a cure found for ignorance.... great post, Bibi!

Thank you Repeater. Appeciate it. And thanks tlso Fuff and Kate on the go. As Martha Stewart claims, a 'cure' for ignorance be " a good thing".

When I sat down to blog I had no idea what I was going to write, and as I logged onto my laptop, I saw a headline from CNN that set me ablaze.